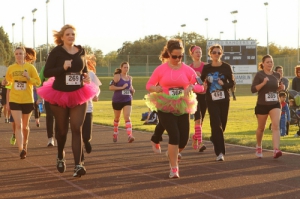 About 1000 guests of all ages came to take part in the Spooky Skedaddle 5K and Festival at the Texas School for the Deaf campus on Saturday, October 27.

Runners dashed round the campus, hot air balloons lit up the night sky, and children searched for candy in a scavenger hunt. Plus, festival-goers danced to Thriller, played balloon darts and screamed their way through the haunted house. All of this Halloween fun was had in support of Language for All, a campaign funded by the Texas School for the Deaf Foundation designed to bring awareness and support to all deaf and hard of hearing children in Texas. Click the attached link to view pictures of the event: http://www.flickr.com/photos/88092972@N05/. 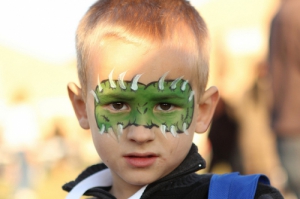 A special surprise came when Ryan Gosling and the crew from Terrence Malick’s yet unnamed film showed up to capture footage of the event which may be included in the upcoming film. Click to read the press coverage of Ryan’s appearance at the event (http://www.washingtonpost.com/blogs/celebritology/post/ryan-gosling-and-michael-fassbender-showed-up-by-surprise-at-a-charity-event/2012/10/30/25a8f0c0-22ca-11e2-ac85-e669876c6a24_blog.html).

More media coverage of the event can be seen at iDeafNews.com, who filmed at the event and are now featuring a video of the Spooky Skedaddle on their homepage: http://ideafnews.com/

The event raised almost $15,000 in support of deaf children in Texas.