Texas School for the Deaf Class of 2019

Texas School for the Deaf Class of 2019 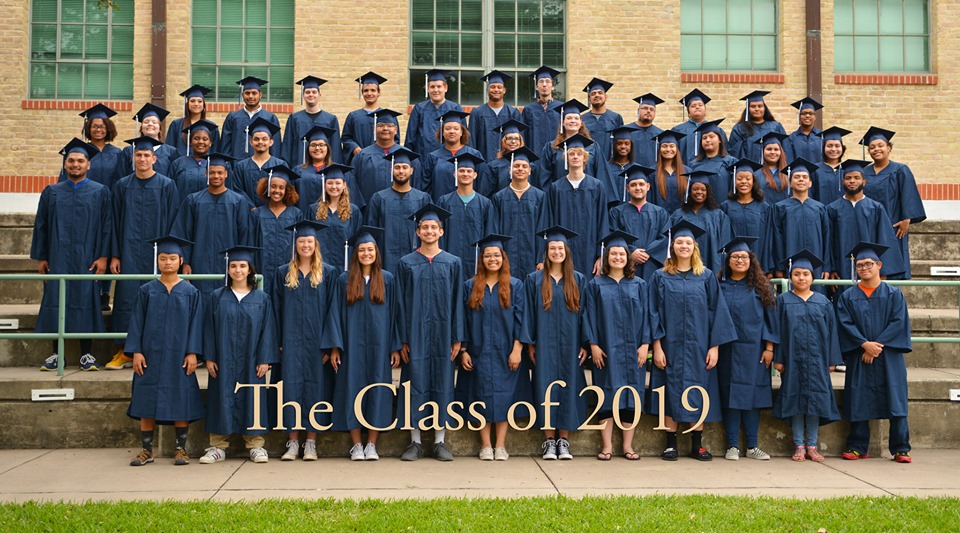 Austin, Texas – May 30, 2019 – Fifty-four Texas School for the Deaf (TSD) seniors will participate in the traditional awarding of diplomas and turning of the tassels during commencement exercises today at 2:00 p.m. in TSD’s R.L. Davis Auditorium, at 1102 South Congress Avenue.

Known as an entertainer and Deaf advocate, Linsay Darnall, Jr., delivers the commencement address to the Class of 2019.

TSD and the Class of 2019 celebrate a year of academic and athletic achievements, including:

At TSD since 2008, an honors student all four years of high school and an all-around athlete who participated in four sports at TSD, Sunita Schmidjorg, is the class of 2019 Valedictorian and was Player of the Year in both volleyball and basketball.

Salutatorian, Leila Sicoli, has been a student at TSD since 2004 and been involved in countless academic and extracurricular activities.

Both of these top honor grads will attend Gallaudet University to continue their academic and sports careers at the world’s only liberal arts university designed for deaf and hard of hearing students, in Washington, D.C.

Claire Bugen, TSD Superintendent says, “Graduation at TSD is always bitter-sweet seeing many of these kids graduating who have grown up here at TSD, each with their own unique story.”

“I’m especially excited that 31 of our graduating seniors have received acceptances to two- and four-year colleges and universities.”

How to use TSDF Crowdfunding?

This page is so you can know how to input your own content, video, and images in your individual crowdfunding page.

You already have your own login and password for you to control the content, video, and pictures of your minigrant project. You will be able to edit anything on your personal page except for the request amount of funding – it will be locked and the same from what you originally requested.

It is a very simple process. To start, click My Projects > Edit. We’ve already created short and long descriptions for your pages, but you are free to change or edit as you wish. There are four main areas of your web content:

The short description is text that is only one-two sentences and will be the summary of your fundraising goal. It will be featured just above the donation link on the sidebar.

The long description is the main content of your page. It will be a few paragraphs long. If you want to add images to your main content, you can do so. To do this, click the media button and upload the images. You can place them anywhere within your long description.

The Video Embed Link is where you put in the video for your project.

We encourage you to create a video using your iPad or iPhone, edit it, and upload to your YouTube channel. If you do not know how to do this, find someone within TSD who can. There are certainly plenty of YouTubers around! When you have finished uploading your video, you will see a “Share” button just under your video. Copy that link and input it in the Video Embed Link and then your video will be up on your page.

You will see the Featured Image at the bottom of your post, and that is where you change your image for the featured image. This is the main image, so choose a nice and eye-catching one.

The content and video for your pages are due January 8 and after review, will go live on January 12.

We encourage you to think outside of the box and be creative in how you want to raise the funds. Don’t just stop at posting on Facebook – you can contact your family, friends, local businesses, or any other avenue that you can think of.

If your project is not fully funded by the deadline of June 5, the money will still be allocated to your project and you will have to reduce the items requested. Naturally, a fully funded project will be submitted to you upon reaching the goal.