TSD Scores Big At Battle Of The Books! 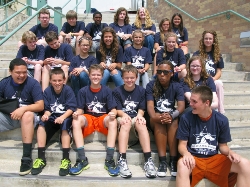 Students from the Texas School for the Deaf did a great job at the past Battle of the Books (BOTB) Placing first on two of the four divisions and 2nd in the other two.

You will note that of the FOUR divisions of play, TSD came in 1st place in TWO of them (Clerc and Foster) and 2nd place in the other two (Gannon and Galloway). In the case of the Gannon division, we tied for wins/losses with MSD (the winner), so the split was determined by total points. MSD – 78; TSD – 77.

I was bowled over. The kids were PHENOMENAL! Thanks you to those who took time to come up and watch any of the matches. It certainly motivated the students to see how many people were interested in the outcome.

THANKS SO MUCH to the students, the coaches (Oscar Ocuto, Gabi Nocciolino, Karol Hogan, Joey Hoover-Simon, and Coleen Utzman), to Sonia Bridges and Cassidy Gallindo for their work setting up the technology, and (most especially) to SANDY KIMBALL (BOTB Superstar!) for being there for almost every game and keeping things running smoothly.

Next year we’ll be asking for more folks to help as it appears that it is our turn to host once again. Thanks again and CONGRATULATE THE WINNERS, which means all of the students who participated.

Please click here for final results of this year’s Battle of the Books (BOTB) competition, which was hosted by Maryland School for the Deaf: http://www.msd.edu/bob/results.html